Be a part of Lindamood-Bell!
We're hiring! 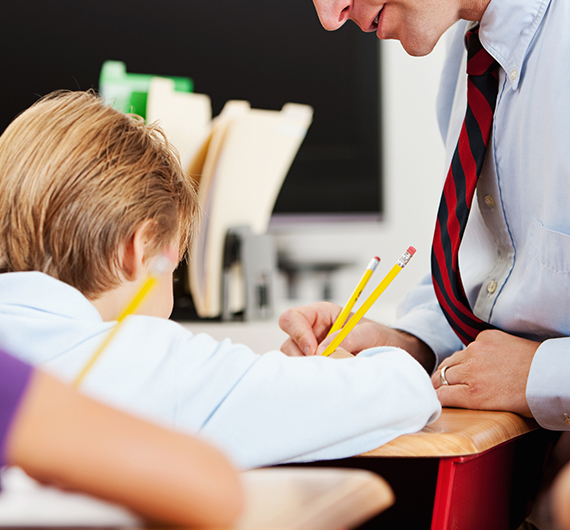 For some scientists and researchers, understanding what enables children to learn to read is their mission, and recently, a peer-reviewed study has provided new knowledge about the brain and reading. Using this insight, as well as information from other studies and work, a rural school district in Colorado has set an example of how administrators and teachers can utilize instruction validated by research to improve the literacy skills of their students.

In August of 2011, the journal NeuroImage featured the results of a study that examined changes in reading skills and gray matter volume (GMV) in children with dyslexia who received intensive reading instruction in a program that develops literacy skills. The independent study, conducted by researchers from the Center for the Study of Learning, Georgetown University Medical Center, and Wake Forest University Baptist Medical Center, showed three important results. First, training-induced changes in GMV were observed. In addition, reading improvements induced by instruction accompanied the GMV changes. Finally, and especially important, both the GMV and reading skill changes were maintained after the instruction ended.

The intervention used in the study, Seeing Stars®: Symbol Imagery for Phonological and Orthographic Processing in Reading and Spelling, included visual imagery of words, multisensory integration, and development of the sound representation of words. Behavioral tests and magnetic resonance imaging (MRI) scans were performed before the intervention, after the intervention, and again after an eight-week interval in which no interventions were given. Reading behaviors significantly improved, and for the first time, the results of the study indicate that GMV increases in the left anterior fusiform gyrus/hippocampus, left precuneus, right hippocampus, and right anterior cerebellum occur as well. These are areas of the brain that have been shown previously to play a part in learning and visual imagery.

These findings provided encouragement that learning can result in both lasting behavioral and structural changes in children who do not easily learn how to read. “For many years we have noted significant improvement in decoding and reading comprehension when we focus instruction on mental imagery as applied to language and literacy skills,” says Nanci Bell, director and co-founder of Lindamood-Bell Learning Processes, and author of the Seeing Stars program. “The results of this MRI study not only validate that instruction in imagery results in improved reading behaviors, but also results in important and lasting changes in the brain. This is a very important finding in the field of reading research, especially as related to changing the profiles of children who have decoding difficulties.”

The results of this study, along with many other neurological-behavioral study findings, helped educators in a small town in Colorado decide which Department of Education-approved provider could supply the reading intervention that would best help the children in their district who were struggling to learn to read.

West of the Rockies, in southern Colorado, lies the rural, agricultural city of Center. The people of this close-knit community care deeply about their neighbors. They watch out for each other and want better for their children than they have for themselves.

So it was heartbreaking that by 2010, Haskin Elementary School was a chronically low-performing school. The teachers at Haskin tried program after program to improve the reading proficiency of its students, to no avail. Many children struggled to read at grade level. Test scores were low and stayed low.

As a result, that same year, Haskin was one of six chronically low-performing, Title I elementary schools (at least 40% of children must be from low-income families; 82%-92% of children at Haskin are from low-income families) in Colorado to receive federal School Improvement Grant (SIG) funds to turn around the academic performance at their schools. Each school chose Colorado Department of Education-approved turnaround providers and implemented improvement strategies over the next few years.

The Lindamood-Bell programs used were Seeing Stars (Bell, 2013) and Visualizing and Verbalizing® (Bell, 2007); both of which are theoretically based [Dual Coding Theory (Paivio, 1986)] and research-validated. The Seeing Stars program develops the imagery-language connection, or symbol imagery: the ability to visualize sounds and letters in words for both phonological and orthographic processing that enables word attack, sight word development, and fluency/contextual reading. Nanci Bell uses the following example to illustrate how instruction in the program works. In this example, Ms. Bell is the teacher and Buzz is her student:

I show Buzz a card with the word ap on it. After I take it away, I ask, “What letters did you see, Buzz?” He replies, “An A and a T.” I note Buzz’s error. He has substituted a T for a P. Rather than saying, “No, that’s not right. It is a P, not a T,” I meet Buzz with a positive comment and respond to his response. “Good job, Buzz. There was an A. If the letters were an A and a T, it would look like this” [writing out the letters AT]. After responding to his response, I help him compare his response to the stimulus by showing him the card again. “Here is the word again. Is there a T at the end?”

The Visualizing and Verbalizing program, on the other hand, develops the imagery-language connection, or concept imagery: the ability to create an imaged gestalt (whole) from oral and written language that enables comprehension, critical thinking, and the ability to understand  academic content areas. Here is Ms. Bell’s Visualizing and Verbalizing example:

A student is visualizing and verbalizing the sentence The lion in the tall grass. When asked how tall she pictured the grass, she answered, “Very short.” You might respond, “I’m glad you have that grass pictured.” It’s important to give positive feedback, even if it’s just for the fact she responded to your question. You must question carefully to help her see the implications of her response. You might respond, “When you say very short grass, what are you picturing? Grass short like this [gesture about half an inch] or grass short like this [gesture about two inches]?” If she doesn’t modify her response, question to help her see where her response doesn’t match the stimulus. “Let’s read the sentence again: The lion hid in the tall grass. What did the words say to picture? Tall grass or short grass?”

Haskin teachers and paraprofessionals were trained in the programs and delivered instruction developmentally (Tier 1 and 2) and remedially (Tier 3) at all grade levels. Under this Response to Intervention (RtI) model, Tier 3 students received intensive instruction in small groups while Tier 2 and 1 students received instruction in larger groups and entire classrooms. Using a data-driven approach, teachers were trained to administer a battery of diagnostic assessments to determine the specific needs and courses of instruction for at-risk students. To accomplish all of this, a Lindamood-Bell consultant was on-site full-time at Haskin the first year, half-time the second year, and periodically the last couple of years. Haskin teachers also received weekly off-site support from Lindamood-Bell through phone and video conferencing. Haskin adhered to the Lindamood-Bell model, which earned them high marks in terms of fidelity of implementation. The bottom line—Haskin staff was accurate and consistent when it came to delivering Lindamood-Bell instruction. Buy in, from the top (the superintendent and school board) to bottom (principal, teachers, and paraprofessionals) was a key factor in Haskin’s successful implementation.

In 2014, after several years of implementing Lindamood-Bell and Focal Point, Haskin clearly turned things around. Haskin outperformed the other SIG elementary schools that implemented different turnaround strategies over the same period of time. For example, on the state reading test (the Transitional Colorado Assessment Program, or TCAP), Haskin gained 39 points, and the other schools gained 10 points combined.

The Regional Literacy Intervention Project Coordinator for San Luis Valley Board of Cooperative Educational Services (BOCES; Center is one of the districts in the BOCES) said, “I truly believe that choosing to implement Lindamood-Bell at Haskin Elementary was a great decision. Our students are being challenged more than ever before and our teachers have the tools, the metacognitive strategies, and support to reach them.” Haskin’s Principal said, “Lindamood-Bell has had an enormous impact on our school and on our students. The training our teachers received impacted all areas of their instruction and led to increased student achievement across the content areas.”

Superintendent George Welsh said, “I think the results we are achieving are a real-life indication that a significant infusion of dollars, spent wisely in targeted areas, can produce the kinds of results the state has striven for through the education system it has designed. Without the training and resource opportunities that were afforded to us through our turnaround grant, we would probably still be where we were in 2010 when only 28% of our third graders could read at grade level.”

With nearly two-thirds of their students not proficient in reading, and with the lowest academic performance rating, Haskin Elementary School faced the daunting challenge of turning around their school. In 2015 they are proud that they were able to utilize School Improvement Grant funds and their knowledge of how children learn, to choose research-based intervention that would meet the needs of all students. Not only did Haskin become an example of putting research knowledge into practice, they outperformed the other SIG schools on the state reading test and on overall academic performance. They showed that economically disadvantaged students at a chronically low-performing school should never be discounted.

Connect with us
Follow us for the latest news, stories, and more!
30
We are so excited to celebrate our London Learning Center’s 20-year anniversary!
Twitter: lindamoodbell

Help your child start the new school year on the ...

At Lindamood-Bell Academy, we have a recognized ...

Do you know the story of Juneteenth? Learn more ...

It's not too late to enroll! Lindamood-Bell ...

Imagine your child returning to school in the fall...